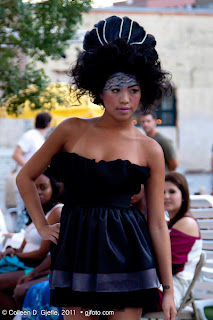 Earlier this month came an opportunity to attend – and photograph – a fashion show. It came to me through the website “Model Mayhem”, which I’m a member of.  By the time I got the invite, it was only a week away, but I scrubbed my other plans so I could jump on this opportunity. It was held in mid-July at EA Effects Boutique at the Piazza at Schmidt’s in the Northern Liberties section of Philadelphia. Thankfully for all, the weather was perfect as we were in a lull between 90-degree heat waves. I had no idea what to expect as I’ve never seen a fashion show before. I had HEARD of them, but I’d also heard of Big Foot and the Loch Ness monster as well, so that tells you just how much knowledge I had on the subject. However, I was excited at the chance to try something different. 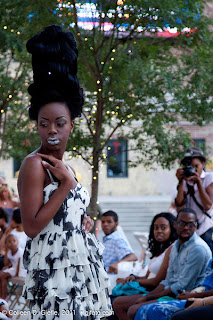 I arrived, found the boutique and observed a small space packed with beautiful young women milling around with what seemed to me to be an air of purpose touched with just a little confusion. I found someone who “looked like she worked there” and asked for Philip, who had sent out the invitation and whom I had called to RSVP.  He was a very pleasant young man with Bell Management, one of the co-sponsors of the event. Philip gave me a warm welcome and introduced me to another photographer who had experience with fashion shows. The photographer, Will Stotler, gave me some hints and guidance, which I greatly appreciated. He also correctly forecast that the show would start at least an hour later than the posted time of 7:00 pm. The first model started her walk around 8:15, so I figured that’s where the phrase “fashionably late” must have come from! Not having any idea what to expect from the fashion show, but having photographed a few models before, I had arrived with the mindset of PORTRAITS when, as I quickly figured out, I should have had the mindset of SPORTING EVENT. Despite having started over an hour later than scheduled, once it got going, it all went very quickly! The models moved at a pretty fast clip, briefly paused & posed at the end point of the runway (intentionally kept open for us photographers) and then gracefully made their way back into the boutique. I adjusted quickly enough to the fast pace, but lost several shots to some guy who was frequently jumping in to take a snapshot with his annoying little point-and-shoot camera that he pulled out from his shirt pocket. Just when I was getting ready to release the shutter, Mr. Point & Shoot would leap in, blocking the scene I had been composed in my eyepiece. (Did I mention that he also stomped on my flip-flop clad foot not once, but twice? It apparently took me swearing at him rather vehemently the second time for him to mind his space!) Before the show began, I had gotten the impression of semi-controlled chaos when I was viewing the models, designers, hair and makeup artists milling around inside of the tiny boutique.  The after party seemed to be a similar event, but with the audience participating in the happy turmoil as well.  I was especially interested in finding the hair models, who had incredible “hair jobs” done by Bethany Queenb Bell.  I found one of the two and got some nice additional shots of her. All in all, this was a fun and educational experience that I really enjoyed and hope to do again, even with the point and shoot dude. If you enjoy these photos, you can see more of my work at my website at gjfoto.com. (All photos copyright Colleen D. Gjefle, GJFOTO.com, 2011)